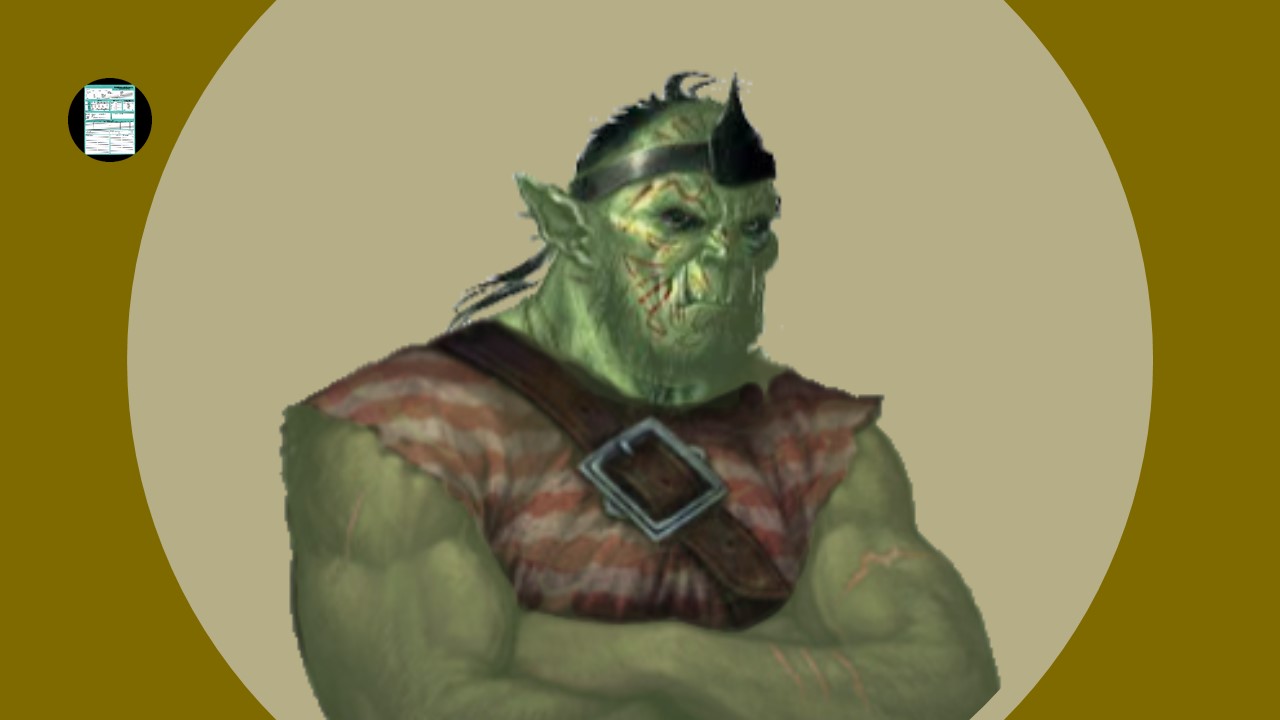 Stonebreaker’s birth is the result of a human female slave and an orc slaver. Stonebreaker’s father was/is a small-time slave trader along the Dragon Coast. All of his half-human siblings and himself were treated like slaves and not better than a beast of burden. Stonebreaker learned basic sailing skills while young and was especially adept at rope use and working in the rigging. His other task as a slave was to break stone on islands off the coast to be used as ships ballast, which was another line of business his father was involved in …

His mother survived a number of years aboard a ship and on the islands used for trading and this allowed Stonebreaker to develop a moral compass and hence the “good” part of his alignment. He exhibits this upbringing by always giving to the poor when the opportunity presents itself. He abhors the oppression of any humanoid creature and takes great pleasure in killing anyone directly involved in the slave trade. He is not contemplative and often rushes into decisions when adventuring although he is more thoughtful when alone. This sometimes makes him appear to be less concerned with being good than acting quickly. He views killing as a solution rather than a problem, moral or otherwise.

When his mother died, after a short, brutal life, he stowed away on one of the pirate ships that purchased ballast stone from his father. Once discovered he was put to work as a sailor and minor pirate. He eventually escaped the pirates and came ashore in Westgate, where he soon fell in with the Thieves’ Guild. His brutish appearance and strength earned him a position as an enforcer and general thug. He used these opportunities to develop his skills and gave away much of his meager earnings to the poor. He is not opposed to attaining wealth but views it as a way to do good rather than obtain power. The guild generally did not interfere with the poor and the oppressed (they have nothing to steal), so he was fairly well adjusted to a life of crime and bullying crooked merchants. An occasional slave owner also met an untimely death in the city, although Stonebreaker kept his opinions on slavery to himself.

Law that allows for war, oppression, and slavery are the reasons that Stonebreaker has little to no respect for the law or strict societal organization. He does however find himself drawn to people in a way that allows for meaningful loyalty. He is not trusting, but his past mistreatment does make him drawn to those who show him kindness.

Eventually, he heard of an opportunity to join an adventuring party and the idea of travel appealed to a young thief with no true home or family. A gnome smuggler had recently lost most of her wealth and had some ideas on how to regain wealth and status. Stonebreaker obtained permission from the guild to pursue his adventures although he was informed he may be called on to further the interest of the guild during his pursuits. The gnome being female and having an apparent stronger moral compass also appealed to Stonebreaker due to the influence of his mother.